Extending the furlough scheme: will it help working mums as schools reopen? 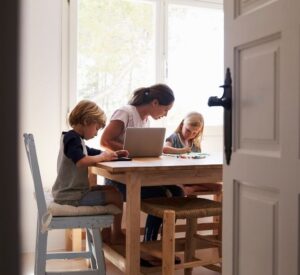 Now that schools have reopened, parents everywhere will be breathing a sigh of relief as we, hopefully, move towards some sort of normality. Naturally, there is some uncertainty around the impact that reopening schools could have on the rate of infection, so we may not be out of the woods yet. The vaccine rollout is progressing at an impressive pace but evidence may yet direct a return to self-isolating and, in turn, home schooling as a result of school closures. Hopefully, such moves would be temporary if they were to happen but, for the time being at least, this additional burden, may not be over yet – particularly for women. Sarah Begley asks if extending the furlough scheme will help working mums as schools reopen?

A recent survey by the TUC suggests that mums have been shouldering the majority of childcare duties during lockdown. Of the 50,000 women who took part, more than 70% of working mothers who had asked to be furloughed for childcare reasons since schools closed said they had been refused.

Of those surveyed, a staggering 90% of working mothers indicated that they had seen their anxiety and stress levels increase during the latest lockdown, and almost half (48%) were worried about being treated negatively by their employers because of childcare responsibilities.

Sarah Begley, Solicitor in the Employment team at The Wilkes Partnership comments, “During the Budget announced on 3rd March 2021, the Chancellor confirmed that the furlough scheme will be extended to the end of September. Employers will contribute 10% of the employee’s salary from July, rising to 20% for August and September. However, there will be no changes to the scheme from the worker’s side, and the eligibility criteria remains unchanged.”

Under the scheme rules, employees can be furloughed with 80% of their wages covered by the government (to a maximum of £2,500 a month) if they are:

Sarah continues “There appears to be a widespread lack of awareness among workers that they can ask to be furloughed for childcare reasons. Two in five mothers said they were unaware that the scheme was available to parents affected by school or nursery closures”.

“Flexible furlough”, as the name suggests, allows furlough on a part-time basis. If an employer supports such a request, this option means families could choose to share caring responsibilities. Ultimately, the decision to furlough rests with the employer, and there are instances where a role is just not suitable for this to happen.

Sarah concludes “We are still navigating uncertain times so the extension of the furlough scheme should be welcomed, and encouraged, in appropriate circumstances”.

If you have any questions about the furlough scheme or flexible working, contact Sarah Begley, Solicitor in the Employment team at The Wilkes Partnership on 0121 73 4312 or at [email protected].