The Christmas Markets Are Back! Despite the Fight to Get Workers to Manage Stalls 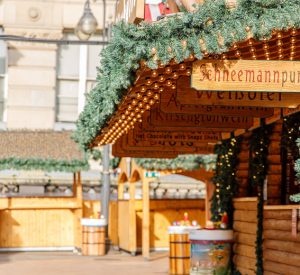 Birmingham city nearly had to wave goodbye to the beloved annual tradition of the German Christmas markets this year, as the abolition of EU Freedom of Movement caused issues throughout the year.

The immigration team at The Wilkes Partnership has brought festive cheer back to Birmingham after helping stallholders and other key workers at the annual Christmas Markets come to the UK once again.

Due to the termination of EU Freedom of Movement, many were anticipating saying goodbye to the much-loved market stalls due to fears of being unable to find workers to  set up for the infrastructure for the market, carry out training and manage the stalls post-Brexit.

However, Pam Sidhu, Senior Associate & Head of Business Immigration at The Wilkes Partnership,  assisted with nearly two hundred bespoke immigration applications to bring back the Christmas cheer the city had missed out on the previous year due to the pandemic.

Operators of the Christmas markets throughout the United Kingdom have spent the past year concerned about how they will be able to bring staff to the UK in order to keep the tradition flowing amid lifted lockdown restrictions.

Free movement between the UK and the European Union ended on 31 December 2020 and on 1 January 2021, the UK implemented a points-based immigration system that prioritises skills and talent over where a person comes from.

However, many of the workers needed for the markets are from the EU and do not fall into specific skilled categories, meaning organisers were having difficulties finding enough staff to assist. With the market organisers wanting to bring over their own long-serving and experienced workers from overseas who assist them throughout the year with other events, they turned to Wilkes Partnership for assistance.

Commenting on this, Pam Sidhu said: “Since Brexit, many businesses have slowly come to the realisation that their EU employees will need visas in order to continue working in the UK. Many options have proved too costly, especially for businesses that have already struggled in the past year with the pandemic.”

The permit that saved Christmas

What many businesses are unaware of is the Frontier Worker Permit Scheme which allows European nationals to work in the UK as long as they have previously worked in the UK prior to 1 January 2021.

Businesses can apply for a Frontier Worker permit for their EU workers if they want them to work in the UK. Business owners themselves can also apply under the Scheme. Broadly speaking, the individual must permanently live in another EU country, must have worked in the UK prior to 1 January 2021, and have generally worked in the UK at least once every 12 months.

Workers may still be able to apply if they have had periods of unemployment or were unable to work for specific reasons during a 12 months’ period.

“The Frontier Worker permit scheme is available to EU workers and self-employed individuals who worked in the UK before Brexit and, despite being a quicker solution for businesses struggling to replace the workers they have lost post-Brexit, there is still a lack of awareness surrounding this cost-effective route. This may be due to the fact that the rules of the Frontier Worker Permit scheme, which were agreed as part of the UK’s withdrawal negotiations with Europe, are complicated”, explained Pam.

“We have been working all year round with market organisers in Birmingham and in other regions of the UK (including Manchester and London) to make sure that the stalls at German Christmas markets could continue as normal after an unexpected year off.

“The markets bring significant economic benefits to not only the market operators, but also businesses in and around the area.

“It is a much anticipated and loved tradition throughout the winter season, so planning and ensuring the infrastructure was established and stalls had the relevant trained staff was highly important!”

The current points-based system that is now in place for EU workers does present some issues and concerns for businesses that previously relied on EU staff. Immigration applications are generally costly, time consuming to prepare and process, and can result in further difficulties if the person is rejected at the border.

Because of this, when the UK officially left the EU as of 1 January 2021, many businesses were worried they would struggle to recruit or continue employment of  EU  workers.

Employers, however, are currently unaware of special routes like the Frontier Worker Permit which is a route for  workers and self-employed business owners to enter  the UK to work for temporary periods.

“Businesses shouldn’t be ruling out hiring EU workers. If the criteria is met, the permit is a quick and cost-effective way to hire skilled and non-skilled workers from outside of the UK. However, it is imperative that businesses obtain appropriate legal advice to make sure any immigration  applications will be accepted, to avoid any problems when crossing the border,” concluded Pam.