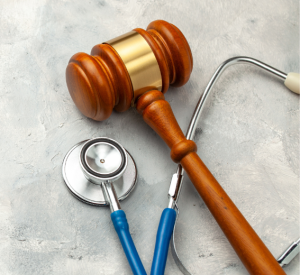 Dr Isyaka Mamman, a haematologist, who lied about his age has been jailed for three years after causing the death of a patient through a botched procedure.

Disturbingly, Dr Mamman had also experienced recent issues with the same procedure on different patients. Margaret Helliwell was left in agony when Dr Mamman attempted to take an identical biopsy by forcing a needle into her hip so hard that the device bent.

Another patient, a 64-year-old man, went into cardiac arrest and suffered permanent disability due to Dr Mamman’s negligence. The incident led to a clinical negligence claim and an undisclosed settlement.

Dr Mamman’s had initially tried to secure a sample from Mrs Parveen’s hip, but failed. He then attempted to gain a sample from her breastbone, which is considered dangerous due to its proximity to the heart. Mamman made several attempts with an incorrect needle before eventually piercing Mrs Parveen’s heart sac, causing massive internal bleeding and death.

Dr Mamman arrived in Britain in 1965 when he began working as a haematologist. However, it was discovered 20 years ago that Mamman was using a Nigerian passport showing his birth year as 1941, while he claimed to have been born in 1936.

However, he then adopted a later birth date at 1947 upon his naturalisation as a British citizen. This gave Mamman an age 11 years younger than the age he gave when arriving in Britain. This lie allowed him to avoid the then compulsory retirement age of 65.

Once Mamman’s lies about his age were uncovered, he was banned from practicing for 12 months. However, astonishingly, he was allowed to return to work at Royal Oldham Hospital in 2006 upon the expiry of his suspension.

Dr Mamman’s charge of gross negligence manslaughter was handed down by Mrs Justice Yip, whom sentenced Dr Mamman to be jailed for three years.

Justice Yip would have consulted the current sentencing guidelines for gross negligence manslaughter to decide the appropriate sentence for Dr Mamman. This would initially involve Justice Yip determining Dr Mamman’s culpability when committing the offence.

These categories will then provide guidelines on how many years’ custody to which the guilty party may be sentenced. Throughout all of the categories for gross negligence manslaughter, the sentence guidelines range from 1 – 18 years’ custody. However, the maximum sentence is life imprisonment, depending on the seriousness of the offense.

When taking into account the current sentencing guidelines, Mamman’s sentence means he has been placed in either category C or D in terms of his culpability. As noted above, these categories include factors that indicate either medium or lower culpability, respectively.

Category D seems to be the most likely choice of Justice Yip, as the factors include the negligent conduct being a lapse in the offender’s otherwise satisfactory standard of care. Although, with Dr Mamman’s most recent care-related issues, this is arguable.

The starting point for Category D is 2 years’ custody, with 4 years’ custody being the highest recommended. Justice Yip seems to have taken Dr Mamman’s age and likely his successful treatment of patients into account, and decided that just shy of the maximum recommended sentence was appropriate. Justice Yip will also have taken into account further mitigating factors, such as Dr Mamman’s guilty plea.

A civil claim is noted to have been brought forward by the family of Mrs Parveen. Liability has been admitted by the trust.

For specialist advice on Clinical Negligence claims, contact Kate Campbell-Gunn, Associate at The Wilkes Partnership on 0121 733 8000 or email [email protected].