Alternative routes into law: An interview with Business Recovery and Turnaround 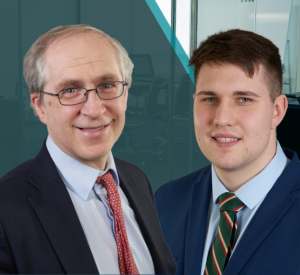 Andrew Garland, Partner and Richard Aston, Paralegal both work in the Business Recovery and Turnaround team at The Wilkes Partnership LLP.  Although Andrew and Richard studied different subjects at university, they both started training for a career in law after graduation. In this short interview, Andrew and Richard explain their alternative routes into law and how it has assisted them develop in their chosen career.

Can you tell us about your route into a career in law?

Andrew: I studied History at the University of Bristol, did the conversion course to law the next year and followed on to the Law Society Finals (which was the equivalent of the LPC) before training in a City law firm.

Richard: I studied Economics and Politics at the University of Exeter. I then applied for a job at Wilkes as a Paralegal in Insolvency.  I am currently studying a Masters in Law and will be doing the SQE1 and 2 thereafter.

How do you think that studying a different subject matter at university has helped you within your career?

Andrew: Studying History meant that I was used to thinking objectively, attempting to eliminate bias, analysing problems and seeing the outcomes which is exactly what I do on a day-to-day basis in contentious insolvency.  Seeing how events turned out in historical situations and analysing why those outcomes occurred has been invaluable in helping to predict the likely outcome of cases.  A great deal of the study of History at university is essay writing which seeks to persuade others that your interpretation is correct.  This has proved invaluable on a day-to-day basis when presenting cases and seeking to persuade parties as to my client’s position.  I also find that having studied another subject means it easier to step back from a particular case which assists in finding pragmatic solutions and lateral thinking.  A key attribute for a solicitor is being commercial. This is much easier to accomplish if you can avoid becoming engrossed in the technical aspects of the case alone. Having experience in a different discipline assists with this.

Richard: Studying Economics and Politics has helped me to develop a concise writing style, enabling me to get the argument or point across clearly and effectively using language that is accessible to all.  Economics and Politics also involves a lot of essay writing using data and therefore I have developed analysis and critical thinking skills.  Much of my study involved applying complex economic theories to real world situations.  There is a crossover here with law which is about applying statute, case law and legal concepts to real world situations.  My study of microeconomics has already developed my commercial awareness, giving me a greater understanding of factors involved in the decision making process of businesses such as pricing and productivity.

How does somebody who hasn’t studied law at university get into this career path?

Andrew: I was initially planning to carry on with my studies in History and was considering becoming a lecturer like my mother.  That would have involved taking a Masters in History.  Ultimately, I decided it was worth looking at law, partly influenced by a summer placement I had done in a law practice. I found this experience interesting and stimulating as it required similar skills to history and also because it was potentially more financially rewarding than becoming a teacher/lecturer.  I became a partner in my previous practice and am now one at The Wilkes Partnership and have found that it has been a financially rewarding switch.

Richard: My interest in pursuing a career in law was probably awakened from studying a third-year university module called Economics and Law.  This gave me a taster of different areas of law whilst looking at legal concepts an economic point of view.  The module encouraged me to research deeper into areas of the law that I might be interested in studying or working on as routes into a career in law.  I then applied for a job as a paralegal at The Wilkes Partnership LLP while also applying to study an MA in Law part-time at the University of Law in Birmingham.  I have now been working as a paralegal for 10 months and am approaching the end of my first year of the MA.  I had also previously spent a summer between years 1 and 2 of my university course working in an administrative role at Wilkes which meant I was aware of the systems and processes at the firm and became comfortable in a legal office environment.

Any advice or tips?

Andrew: If you want a training contract or to get any place in a law firm it is extremely competitive so you need to stand out! Ideally, the way to do this is to have previous experience in a law firm, perhaps by way of a vacation placement.  If this is not possible, see if you can talk to some lawyers so you can get a feel as to what the job is about.  When completing your application or attending an interview, ensure you are able to talk knowledgeably and confidently, about the firm to which you are applying, and why you are applying the above suggestions will help. The key point about an application is hitting the deadline, and making sure that it is focused to the particular firm to which you are applying.

Richard: Legal work experience is very helpful, whether this is done in the summer break while at university or straight after graduation.  It can give you a very good idea as to whether law is a career for you but also gives you practical experience which will prove very helpful in legal studies and the SQE exams. It is also beneficial to plan your route to qualification, especially with the new SQE system of qualifying.  In the new system a lot of weight is placed on Qualifying Work Experience which can now be undertaken at any stage of the qualification process. The standard route to qualification which was previously the LPC then a training contract is now changing. Look around at different law firm’s routes to qualification because, as there is no longer a standard qualification process, some firm’s routes may be more suitable to you than others.